In recent weeks we have watched and heard with profound concern how some celebrities banded together to publish an open letter calling for the LGBTQ+ community in Ghana to be treated equally.

Sister of the late Terry Bonchaka,Ranaya Pappoe popularly known as Shatana has however revealed celebrities are often given payments for supporting LGBTQ+,a move that has impressed donors.

According to the musician, some celebrities who are part of the LGBTQ+ community has approached her with a whopping$50,000 to plump for homosexuality.

Shatana in an interview with Taller Dee on Jodor online radio said “she will never endorse homosexuality no matter the amount she is being offered”. She further indicated Africa’s”societal norms” are different from those in other continents hence the need to reject any attempt to legalize LGBTQ+in Africa.

She emphasize that “homosexual behavior is harmful both to the individuals who choose to participate in and society that chooses to accept it ” Shatana added that it is a demonic spirit that causes a man to be attracted by the fellow man as well as a woman who opt to affair the fellow woman.

Also In Qodarr :  One-armed Man, Pushes 10 Jerricans with a Wheelbarrow

The musician stated emphatically that , celebration of gay behavior and acceptance by our colonial masters will never make it right. Wrong is wrong no matter the number of people that are for it. 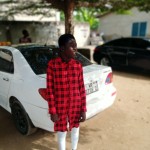 Joseph Quarcoe is the name I respond to. A student of Kwame Nkrumah University at Kumasi-Ghana
Writing, analysis and solving are the hobbies